During different periods of my life, different underlying themes in the form of pictures have popped into my head.

When I was in college and dating the man who would become my first husband, I remember thinking of this odd shaped ball of dry clay and that in our relationship, he was chiseling away this essential part of myself.

But I was bravely carrying on. It never occurred to me that I could do else wise.

From that shaky beginning, our marriage had all sorts of similar problems that marriages are wont to do. I like to say that I come from a long, proud line of people who stayed married no matter how dysfunctional or horrible things were.

And then I came along and broke that familial agreement.

I jumped the boat. I looked around and realized that I was going to die at least mentally if I stayed, and I did not have the wisdom to fix things, so I bailed.

But I didn’t handle my divorce so well either.

I was drowning. With two small kids, a job that wouldn’t cover the bills, a creaky old house and no one around to help me, it was rough. Rough with a capital R.O.U.G.H. I remember nightly sitting in my small concrete washroom as the kids watched television. I would drink a couple of beers to quell my every present anxiety, smoke cigarettes and cry.

The image that surfaces from this period is of me in the water, sputtering, trying to hold up my kids while I go under and under, getting more and more tired.

Along came my husband, and he put down his hand.

Things have been far from perfect. We have had many stressors from the beginning. We’ve fought, yelled and screamed, pissed off neighbors, driven away family or kicked them the hell away as only two bull-headed Tauruses can do. Heck, we were both in the boat, but we’ve been going down rapids, hanging on to the sides of the boat for dear life.

But lately, things are a’changing. I feel it in my bones.

And a new image has arisen.

We’re walking. I’m battered, bleeding and bruised. But I’m walking. And I’m finding my strength. My husband is alongside me. He’s a good man. No matter what life has thrown at him (and it has thrown a lot), he has taken it and kept going, willing to change and grow.

And we’re slowly figuring this thing out … how amidst financial and legal challenges, how to still be there for four children in a blended family, how to be there for each other, how to live each day and keep coming back to love … even when sometimes it feels like the hardest choice in the world.

As I’m walking, I’ve been putting down my hand to others. I’ve been hosting women’s circles, blogging and building face book groups. I’ve been a bit ‘loud’ about it all, so to say. Because nothing fills me so much as knowing that I’ve reached another woman, helped to give her the courage to dig down deep, reach out to the right people and find her own unique path.

Last night was the two year anniversary of hosting women’s circles. And as things do in life, my women’s circle called the Moon Lodge has been shifting and changing. The original group of seven women who had been attending had all sorts of life situations come up that have made it difficult to attend. It’s been a bit rocky and hesitative lately.

But I felt it last night, that women circle magic, when the sum of our parts makes us stronger than we can ever be alone.

New moon in Scorpio. A storm blew in, and the wind kept me up all night. Change and promise. And a new image popped into my head as I pondered through the stillness of the night. 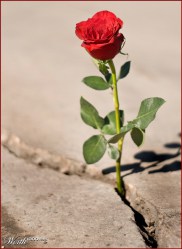 A flower growing in the midst of concrete.

I have seen how every woman who has come to one of the Moon Lodge women’s circles has managed to bloom and grow in their life despite oftentimes inhospitable surroundings. Beauty has still been there.

Just think what we could all do with a little more care, the right soil, sunshine and fertilization …

Alisa Starkweather, one of the founders of the Red Tent movement, tells this story of starting out as a holistic healer and receiving a plant from a customer. Over the years with her limited green thumb, the plant survived but never grew much more than a half a foot.

Then the man she met and married happened to be a gardener and when he saw the plant, the first thing he did was to take the small, struggling plant and replant it in a huge container.

And it grew. To the ceiling, it grew!

Find the right soil that supports your growth. Find a women’s circle. 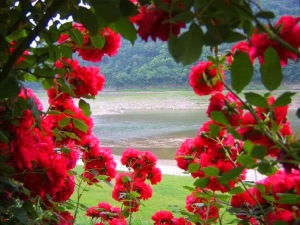 a computer app to help you find a women’s circle near you.

Enter your e-mail here at www.FindAWomensCircle.com

See Sacred Circles Near You

Caryn MacGrandle is the creator behind the Divine Feminine App: an online community since 2016 that has been connecting women (all genders) in Circles, events and resources. If you combined the number of years of experience that the users of the divine feminine app have in doing the Mother’s work, you would be back in time to a society that valued the Earth and the Mother, recognizing that we are all her children and must work together as such. Caryn works tirelessly each day to regain this balance and promote Sacred Circles. Caryn has participated in numerous online and location events such as the World Parliament of Religions in September of 2021 in which she presented a workshop on Embodying the Goddess: Creating Rituals with Mind, Body and Soul, a webinar/panel with Dale Allen presenting Dale’s Indie film award winning “In Our Right Minds: Leading Women to Strength as Leaders and Men to Strength without Armor” and many more. Each and every day, Caryn (aka Karen Moon) works tirelessly towards her belief that the most important area to first find equality and balance is the divinity found within yourself.